The Year of the CALs: Autumn Jewels Wrap

It was a chaotic year for me. I don’t know if I’ve settled down yet from the stresses and tensions of events early last year. But I do know that I needed to get back to crafting … and I’m hoping that there’ll be more time for that this year … Wait, let’s just make it a goal and say that I will make time for crafting this year.

I can’t even remember now what I was working on during the past year. I did take quick photos of some projects, and I did finish some items, so let’s start from there.

This past year was the Year of the CALs. After so many years of declaring intentions to join and participate in a CAL and downloading the patttern, this past year, I actually did join and stuck to it! Wow !

Maybe because last year was stressful, and the CALs gave me a purpose to sit and work on something. The weekly releases of the pattern probably did help in settling me down, in giving me something to work towards to, and following a pattern instead of trying to make up random stitches and counts probably helped a lot too 🙂

And here’s the first one that I was actually excited to work on – the Autumn Jewels Wrap. Actually, I worked on this after the CAL was done, but I’m counting this as a CAL that I actually ‘joined’ 🙂

I got this yarn from a stash forum. And when I saw a pic of the Autumn Jewels Wrap, I knew that the yarn would be perfect for it. The colours weren’t jewel tones, but I liked the sparkly thread that ran through the yarn, so that can be the jewels part of the pattern 🙂 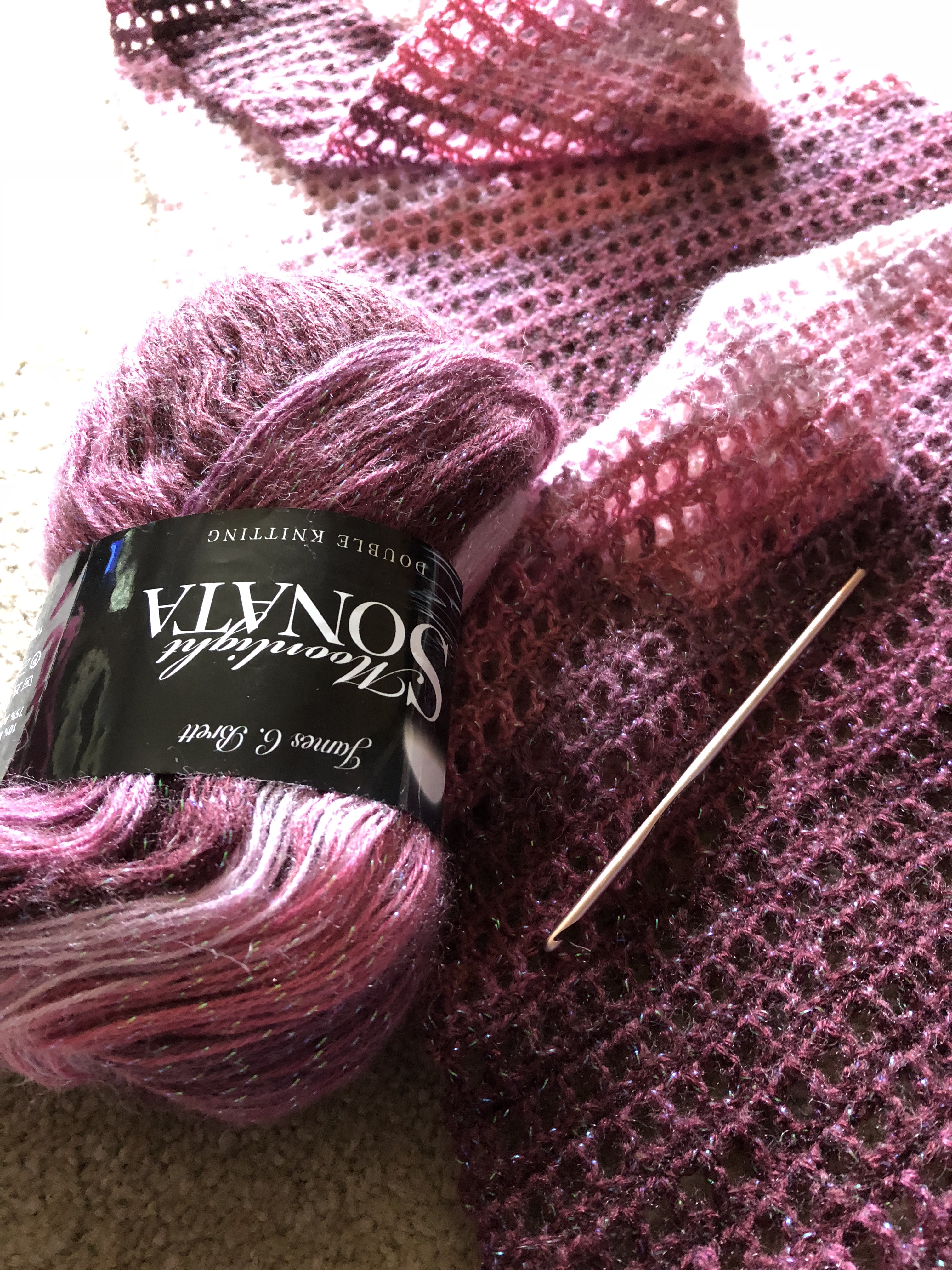 The pattern is not hard, and neither the construction of the piece. I’ve made items in similar fashion, either by design or mistake 😮 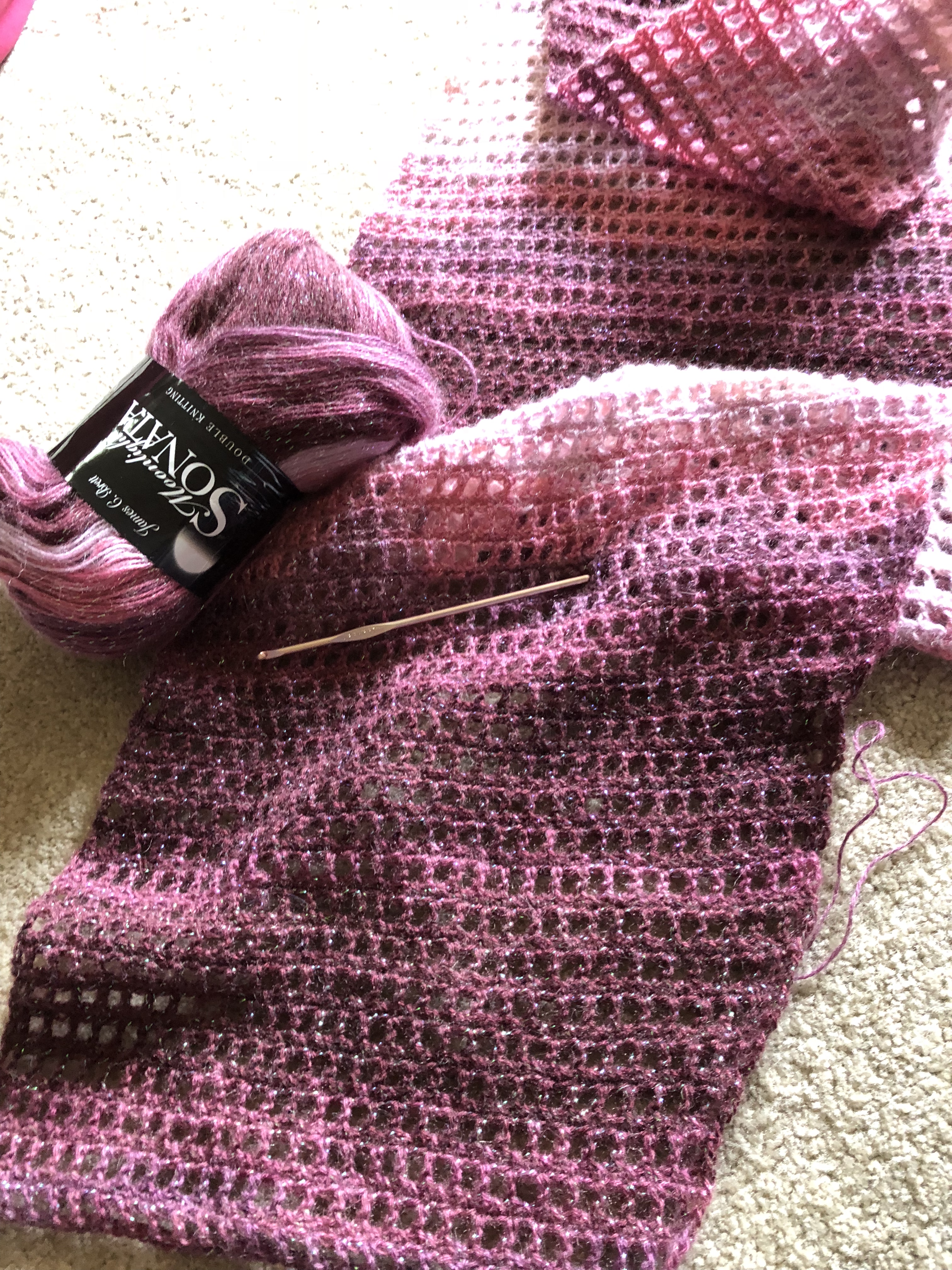 Decorative borders are always something that I’m at a loss to do, other than crochet evenly across the edges and then a couple of rows/rounds of single crochet. Maybe that’s something I should experiment with this year, and come up with a go-to border pattern that I can use in projects. It shouldn’t be that hard.

I really enjoyed working on this. The sparkly thread made this a little stiff, but it’s still drapey enough over the shoulders.

I’m on the lookout now for jewel-toned yarn to make another one, in a smoother yarn (maybe a wool/silk mix), and in a bigger size. Let’s see if I can get it done in time for autumn this year 🙂 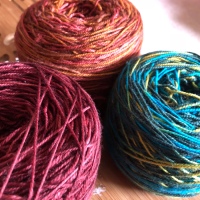 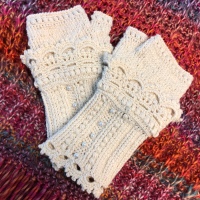 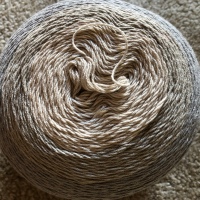 ©ColouringWithYarn and www.ColouringWithYarn.wordpress.com 2012-2019
Unless specified, all photos are copyrighted by marissafh.com.
Unauthorized use and/or duplication of this material, including photography, without express and written permission from this blog’s author and/or owner is strictly prohibited.
Excerpts and links may be used, provided that full and clear credit is given to Colouring With Yarn and ColouringWithYarn.wordpress.com with appropriate and specific direction and/or links to the original content.